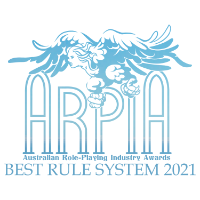 GRIMOIRE is an award-winning story game designed for one player in which they will create spells and explore what it means to be a wizard.

In other classic dungeon crawling games, the wizard seeks out and finds grimoires - powerful books of mystical energies that contain the spells of an ancient wizard.

Who was that wizard?

What spells did they discover?

What happened to the wizard?

GRIMOIRE will provide you these answers and help you create those mystical tomes for other wizards to uncover.

HOW DOES IT WORK?

GRIMOIRE begins with you writing down some details about your wizard such as their name, what they value, what drives them, and whom they know.

Next, you will begin your story of spell crafting via responding to a series of prompts that are generated using a deck of playing cards.

You may conduct research for low risk progress on a spell or spend some coin to obtain the exact component you need for that spell. If you run out of coin or take too many wounds, then you may need to seek aid from friends at the risk of running into enemies. A selection of actions are described in the book to help you navigate through your story (See the rules reference image).

As you play, you will create a journal that describes your wizard's story, and the spells created and how they have been twisted by your wizard's changing values. This will continue until your wizard either completes their goal or perishes.

Will your wizard succumb to the years?

Will the lust for power drive your wizard mad?

GRIMOIRE will help you tell their story.

You can subscribe to the Bardic Inquiry mailing list to receive occasional free content for GRIMOIRE such as new bond types, name tables, and whatever else I can think of to improve upon the game.

In order to download this Solo Roleplaying Game you must purchase it at or above the minimum price of $6.99 USD. You will get access to the following files:

Support this Solo Roleplaying Game at or above a special price point to receive something exclusive.

If you are in need and cannot afford a copy of the game, help yourself to a community copy of GRIMOIRE.

Every direct purchase of GRIMOIRE adds a community copy.

So I emailed this morning due to a slight issue I had- I meant to buy this game and the expansion to it but accidentally bought the base copy twice instead. I was emailing to see if I could get a refund on the base game so I could buy the expansion, or if you could just give me access to the expansion since it adds up to me essentially just paying an extra $2 instead. I only leave this message here since I don't know how your notifications are set up. That being said- I've enjoyed looking over my copy (or copies?) of Grimoire! It's been a great read and I can't wait to have the expansion so I can sit down and play- it has the best vibes for this spooky season!

Reply
The Bardic Inquiry3 days ago

Thanks for reaching out! I have contacted you privately via email :) .

Had a great time playing this. Check out my review if you'd like to read a little more about the game and how it plays! I include writing from a few prompts also.
https://croakerrpgcorner.blogspot.com/2022/09/grimoire-solo-journaling-rpg-of-im...

Reply
The Bardic Inquiry22 days ago

Thank you so much! I really love how you incorporated some of your journaling throughout the post. Very well written and I am glad you enjoyed your time with GRIMOIRE!

Reply
Blackdragondungeoncompany114 days ago(+1)(-1)
this was such a fun game. just the idea of applying mechanics to building a grimoire or spellbook is so great.
Reply
The Bardic Inquiry114 days ago

Thank you for the kind words and for taking the time to play GRIMOIRE!

I loved your narration of Burlak Steelstash's brief adventure and your ideas for conversion to DnD at the end were very cool :) .

And it was most definitely a magnificent moustache ;) .

Question - on p24, under the 'discover' action, it says "A player may have as many spells under research at a time which can help research be a less risky undertaking."

Is that meant to simply read, a player can have many spells etc. etc. (no as many), or is there meant to be a number/comparison (as many spells as something)?

Reply
The Bardic Inquiry189 days ago

That is definitely a typo! It should not be a comparison. A player can have multiple spell sets.

Thank you for taking the time to bring this to my attention. I am in the process of updating the file with the various typos I have collated over these past few months.

Oh, brilliant. Thanks for the clarification! :) I'm just on the creating a wizard part now but I'm going ot start a play-through this week. Looking fwd to it :)

I hope you have a good time with GRIMOIRE and keep an eye out for the free update to the .pdf in a couple of weeks :) .

Is there any chance this game might have Community Copies available?

I’m sorry if this was rude to ask. When turned into my country’s currency USD is terrifyingly expensive. Please ignore if I hurt your feelings.

Reply
The Bardic Inquiry1 year ago(+2)

Thank you for your interest in GRIMOIRE :) . You have certainly not hurt my feelings but have reminded me that community copies are important!

I have added some community copies to the page so please feel free to claim one. I look forward to hearing your thoughts on GRIMOIRE :) .

Thanks so much! You are so kind.

Grimoire is a solo adventuring roleplaying game about being a wizard compiling a grimoire. The grimoire that you compile can also be adapted for use in other rpgs, making this one of the rare games that directly encourages content creation for other systems.

Grimoire's PDF is 60 pages, with a layout that feels like an old tome. There's a lot of visual variety and some nice illustrations, and it's really pleasant to look at. The text *is* ever so slightly difficult to read, but I'm not sure this is a bad thing. Taking your time and poring over the words is thematically appropriate, and there weren't any sections that I struggled with.

Mechanics-wise, Grimoire is played with cards, dice, a journal, and any other book of your choice. The other book serves as a word bank, and is used to select keywords for spells.

Character creation is quick, creative, and story-based instead of stat-based. You define traits about yourself, and you define a goal, but you don't allocate any points to anything.

That said, it is possible to lose Grimoire. Gameplay involves navigating a deck of cards---some of which heal you and build your resources, others of which damage and impoverish you. Taking more than three damage kills you. And while you *can* use spells to nullify the effects of negative cards, doing so causes you to gain Corruption, which can also kill you. Furthermore, drawing jokers at any time can set you on a path towards death.

Thankfully, you do have a lot of control over the gamestate. The structure of the game is divided into turns, and during each turn you can select an action from a detailed list. Actions include things like beginning research on spells, encountering cards from the deck, spending coins to heal yourself, or burning cards from the deck for small amounts of coin.

Grimoire's central mechanic of spell research is also handled through actions, although it feels more detailed and procedural than the rest of the game. You start researching a spell by playing a face card, and then complete it by playing other cards equal to the Spell Point value of the face card. Go over, and the research fails. Succeed, and each card adds context to the spell, giving you a unique and detailed magical ability.

Examples are provided (as is a very helpful condensed rules reference,) but there is a somewhat arcane feeling to the process, and the game seems to intend for you to have multiple spells in progress at any given time, allowing you to shunt new cards over to spells they won't scuttle.

Overall, if you want a meaty solo game that will make you feel like a wizard, has a decently long runtime, and will generate spells that you can adapt to other game systems, I'd strongly recommend checking this out.

Reply
The Bardic Inquiry1 year ago(+1)

Thank you for the kind words and taking the time to play GRIMOIRE :) .

Hey! I want to run a game of Grimoire since it looks pretty amazing.

I'm having a problem understanding the flow of the game. The rules says I can either RESEARCH or QUEST. Quest gives prompts so I'm pretty clear on what I should do. The RESEARCH part however, only says that you spend 2 coins and make a new spell.

The question is: what use are the research location prompts then?

I have a theory but I don't know if I'm right. I thought that maybe when choosing RESEARCH you pick a card and react to the research location prompt. And then only when you have 7 cards can you spend 2 coins and get a new spell?

Thanks for your nice RPG!

Reply
The Bardic Inquiry1 year ago(-1)

Thank you for taking the time to download and play GRIMOIRE - it means a lot to me :) .

Your theory is correct! However, I would like to clarify some things from the process for you here. As I am sure you are aware, the instructions for this part of the game are on page 17-20.

You can find an example of play of this section on page 18.

I hope this clears it up and allows you to play GRIMOIRE further! And keep an eye on this space for the overhauled systems (once I find time haha). 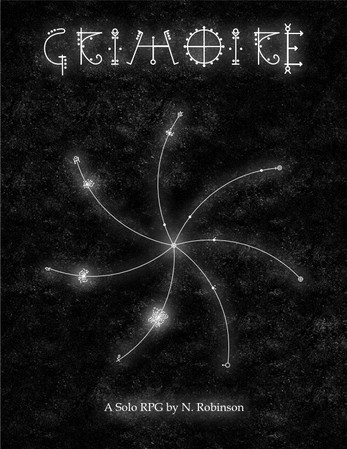 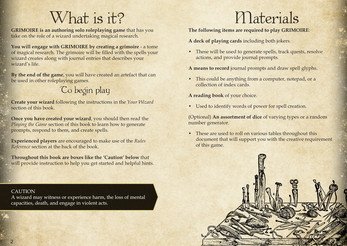 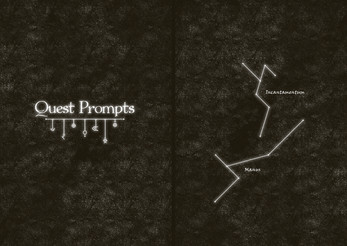 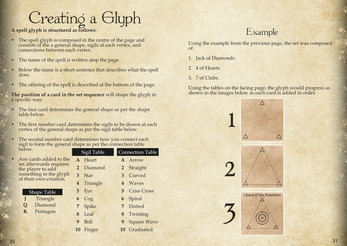 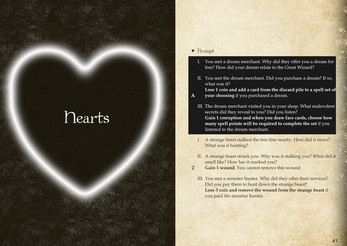